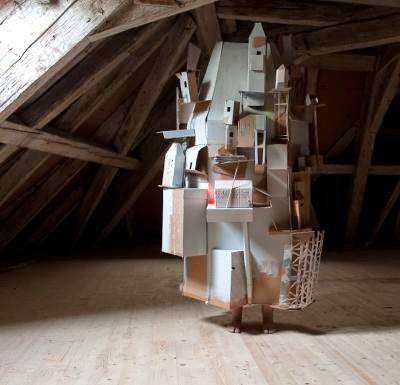 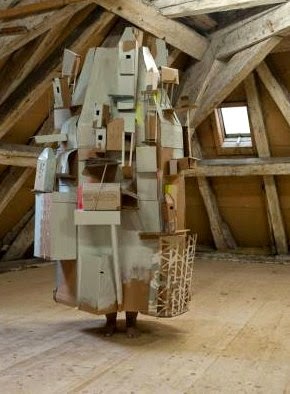 Emily Speed wearing her costume sculpture constructed from waste cardboard, wood and plastic as a carapace.

"Inhabitant was made during Urban Interventions, an exchange residency based in Linz between European Capital of Culture cities. Nominated for the residency by Liverpool Biennial, I worked at Salzamt Atelierhaus from July to September 2009.
A sculpture made and worn around Linz, Austria, Inhabitant is about trying to find your own place or identity in a city and the representation of psychological space. The final form was influenced by the time spent in Linz and took on some characteristics of the architecture there. The materials in the work - cardboard, wood and plastics - were all previously discarded and these made fragile, temporary building blocks. Worn, or inhabited, this work sits somewhere between a garment and a sculpture. It is like a shell or façade, in which I, although concealed safely inside, remain vulnerable, without the ability to see and encumbered by my own creation." Emily Speed